We often hear about the growing awareness and concern over security and privacy, but how much have individuals’ perceptions really shifted? A recent Pew poll highlights how 8 in 10 Americans feel they have little or no control over their data and they worry about the prevalence of tracking. We wanted to validate for ourselves whether perceptions really are changing, and if so, what some of the causes might be. Importantly, we wanted to assess whether these perceptions shape future expectations of security and privacy.

For this year’s annual Virtru hackathon, my colleague, Jack Britton, and I crafted our own survey on evolving perceptions toward security and privacy. With only 48-hours to conduct and analyze the results, we knew we didn’t have the resources and reach of survey organizations, but we wanted to see what we could accomplish toward achieving any new insights in this space. Fortunately, thanks to our great networks and the power of social media, we had a great response and have some interesting findings to share. We even uncovered robust optimism about the future power of technology to preserve privacy and security.

We opened the 20-question, multiple-choice survey for a 48-hour window during Virtru’s internal hackathon last week. In sum, we received 150 responses through our social media blasts on Twitter and LinkedIn. We wanted to help control for potential biases since our networks likely include security and privacy professionals at a higher percentage than the general population. We found that approximately 42% of respondents are security and privacy professionals, and explored all findings by this division to see if there was a divide.

In general, there were similar perceptions toward security and privacy across the majority of questions, which was a little surprising. Demographically, 57% of respondents self-identified as female, 39% male, 2% non-binary, and 2% did not respond. Respondents were distributed by age as follows: 28% 18-29; 25% 30-35; 21% 40-49; 15% 50-59; 11% 60 or above. In the future, we will consider extending the survey timeframe longer to increase the number of respondents.

Out of the twenty questions asked, several interesting trends emerged. 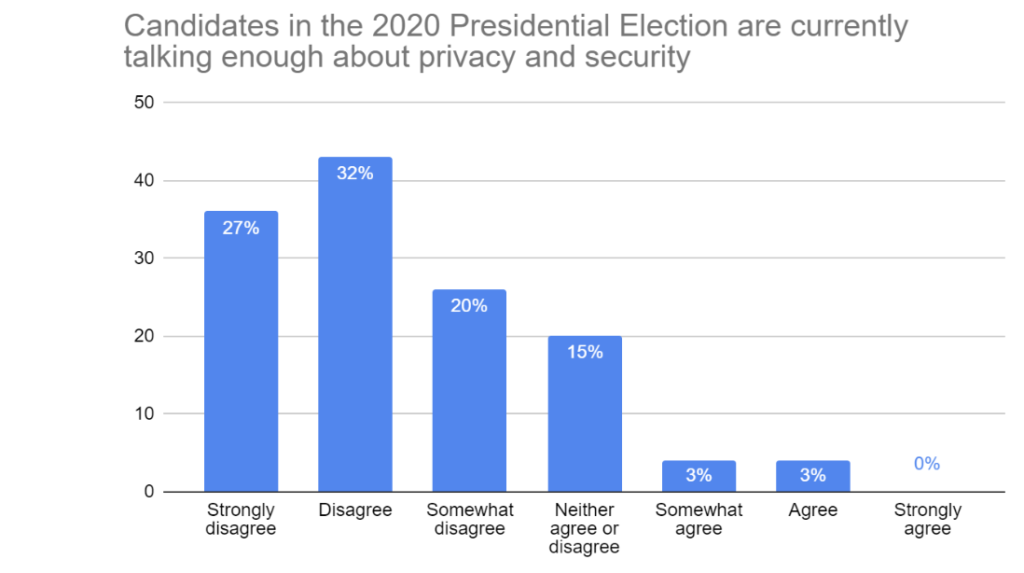 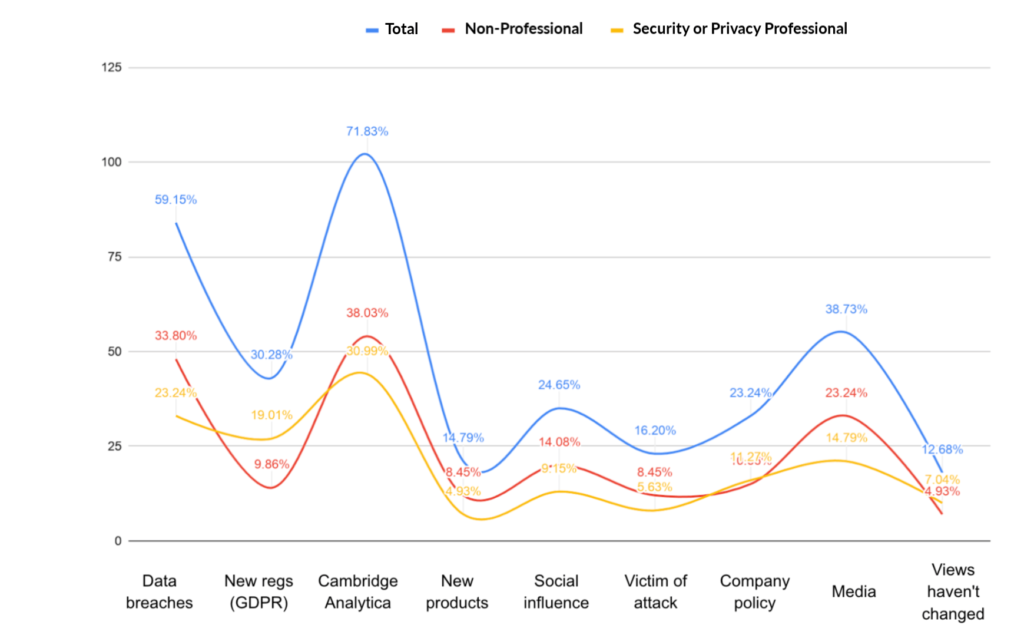 Optimistic imaginations of our techno-future often seem like anomalies amidst the endless drumbeat of breaches and declarations that privacy is dead. We asked two questions looking ahead five years: if respondents thought digital privacy would increase or decrease over the next five years and whether they thought technology will enable greater privacy. Over half of the respondents were optimistic that privacy will increase, and over 40% thought technology would enable greater privacy.

This demonstrates a much greater optimism than we had anticipated, and reinforces the need to counter today’s dominant, techno-dystopia headlines and innovate toward a privacy and security preserving techno-future. In fact, this was the dominant motivation driving Virtru’s hackathon. From chatbots to web scanners to our own survey, within 48 hours we saw glimmers of this better future where privacy and innovation go hand in hand. Keep an eye out for these stories on Virtru’s blog into 2020.  As we continue to explore these evolving perceptions on security and privacy, we’ll do our part to prove right those 40% of respondents who find it likely or very likely that technology will be a greater privacy enabler into the future.